The Barisan Nasional is the longest ruling coalition in the world, having governed Malaysia since its independence in 1957. But it’s not invincible: in 2008, it failed for the first time since 1969 to win a two-thirds majority in Parliament, and in 2013 lost the popular vote, maintaining a parliamentary majority amid allegations of electoral fraud and gerrymandering.

In 2015, the Islamist party PAS split from the opposition coalition Pakatan Rakyat due to disagreements over their desire to implement sharia law in the country. The opposition rebranded as Pakatan Harapan, and is fielding Mahathir Mohamad, Malaysia’s former prime minister, as its prime ministerial candidate, making this election one to watch.

It’s Wednesday night—the country goes to the polls a week from now—and my housemate and I have decide to make the trip to Jalan Masjid Negeri to attend what will be my first election ceramah (rally speech). Since we live in Penang, which has been governed by the opposition coalition since the 2008 elections, we’re sure that we’ll see a large turnout for Pakatan Harapan.

We arrive early and walk around Han Chiang College’s large compound. Stalls filled with T-shirts and vuvuzelas are set up along the perimeter of the field as well as outside the college gates.

“I’ve been selling merchandise since 2013,” one of the vendors tells me as I draw him. He’s bedecked in his own wares: headband, badges, shirt, name tags and the like.

“Do you think Pakatan Harapan will win this time around?” I ask.

He looks off into the distance at the ceramah stage. “Yes, I’m sure of it. This time they aren’t Pakatan Rakyat anymore—they’re Pakatan Harapan.”

The crowd is loud and jubilant; vuvuzelas blare as speakers take their turns on stage. Drone shots show that a few thousand people are present despite it being a weekday night. Jagdeep Singh Deo, the chairman for Housing and Town & Country Planning Committee and N29–Datok Keramat candidate, details the differences between the federal and state governments’ low-income housing schemes. R. S. N. Rayer, the P50–Jelutong candidate, draws raucous applause and cheers when he speaks. Some candidates deliver parts of their speech in Hokkien.

“I’m here to see Lim Guan Eng,” a teacher says. “I haven’t heard him speak in person before.”

Wanting to make an early escape, we leave at around ten o’clock. There are at least 50 people seated on their motorcycles outside the college fences, listening to the speeches. I see later on Facebook Live that the Chief Minister of Penang, Lim Guan Eng, and his father, DAP veteran Lim Kit Siang, have arrived from the other Mega Ceramah in Juru on the mainland. Thumbs-up and happy reactions float non-stop past the mostly positive comments on the livestream.

People are pretty confident that Pakatan Harapan will retain Penang. But anything’s possible in Malaysia.

Two days later, I’m back in my hometown, Seremban. A flyer for the Pakatan candidate has already made its way into my mailbox.

Barisan Nasional retained their hold on the state of Negeri Sembilan in the previous election, winning 22 out of 36 state seats and five out of eight parliamentary seats. Pakatan Harapan are openly gunning to win 19 state seats this time, which would give them the majority in the state house. 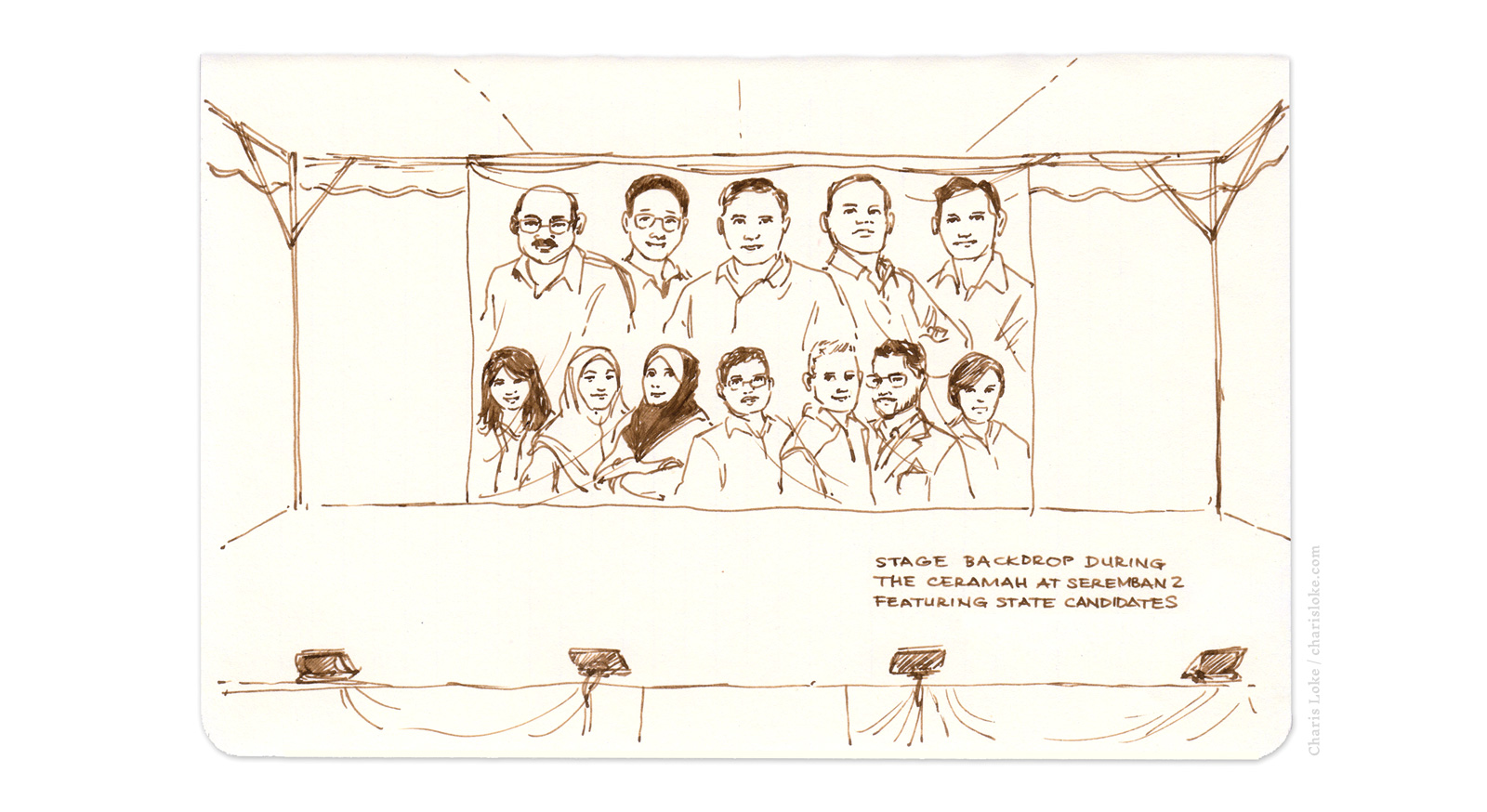 It’s harder to find information on both BN and PH ceramah taking place in Seremban; few candidates post in advance about where they’ll be making appearances. After dinner I make my way to Seremban 2 for a Pakatan ceramah, where I’m pleased to see five women speakers on the poster—a much greater ratio of women to men compared to Penang, although not all of them are candidates.

There are a thousand or more people clustered in front of a stage set up on the road between two rows of shophouses in Seremban 2. It’s quickly apparent that this crowd is markedly different from the one in Penang; for one, they’re mostly seated on white plastic chairs, only a handful of them are waving flags, and there aren’t any Ubah Bird (a mascot for the opposition Democratic Action Party) hats to be seen. They’re also less likely to break out into shouts or cheers. But they listen attentively to the speeches.

A band is called onstage to lead the crowd in singing two Pakatan Harapan songs; volunteers distribute printed lyrics. The crowd waves flags and their mobile phones, lighting up the street.

Pakatan Harapan candidates for state seats make an appearance. Interestingly, they speak a wider variety of languages combined than the Penang speakers—between them, there are portions of speeches delivered in Malay, English, Cantonese, Mandarin and Tamil.

The next day, I try (and fail) to find information online about nearby BN ceramah. So I head to yet another PH event, this time a few kilometres from my family home. The crowd looks to be larger than last night’s—at least 1200 people gather around a stage set up in front of the Democratic Action Party office in Seremban Jaya. A handful of enterprising stalls are doing brisk business selling drinks and snacks.

The incumbent Member of Parliament for P130–Rasah, Loke Siew Fook, makes a brief appearance before rushing off to another ceramah elsewhere in the state. “Help us to take control of Negeri Sembilan this time!” he exhorts the crowd, who cheer in response. The organiser makes full use of the large screen onstage to show videos of the new Rasah candidate, Cha Kee Chin, in his law firm’s office as well as in Putrajaya, the seat of the federal government.

Charis will be reporting back in with more sketches of the Malaysian election, so check back in with New Naratif for more!

If you enjoyed this article and would like to join our movement to create space for research, conversation, and action in Southeast Asia, please subscribe to New Naratif—it’s just US$52/year (US$1/week)!

Charis is an illustrator based in Penang, Malaysia. Drawing upon literature and visual culture, she makes pictures that evoke wonder and curiosity. As a member of Arts-ED, she also works on community arts and culture education programmes for youth. Her work can be found at http://charisloke.com. Charis is Comics Editor and Illustrations Editor for New Naratif. Reach her at charis.loke@newnaratif.com

We believe in full transparency

Get all the latest updates from New Naratif. Newsletters go out every Thursday.