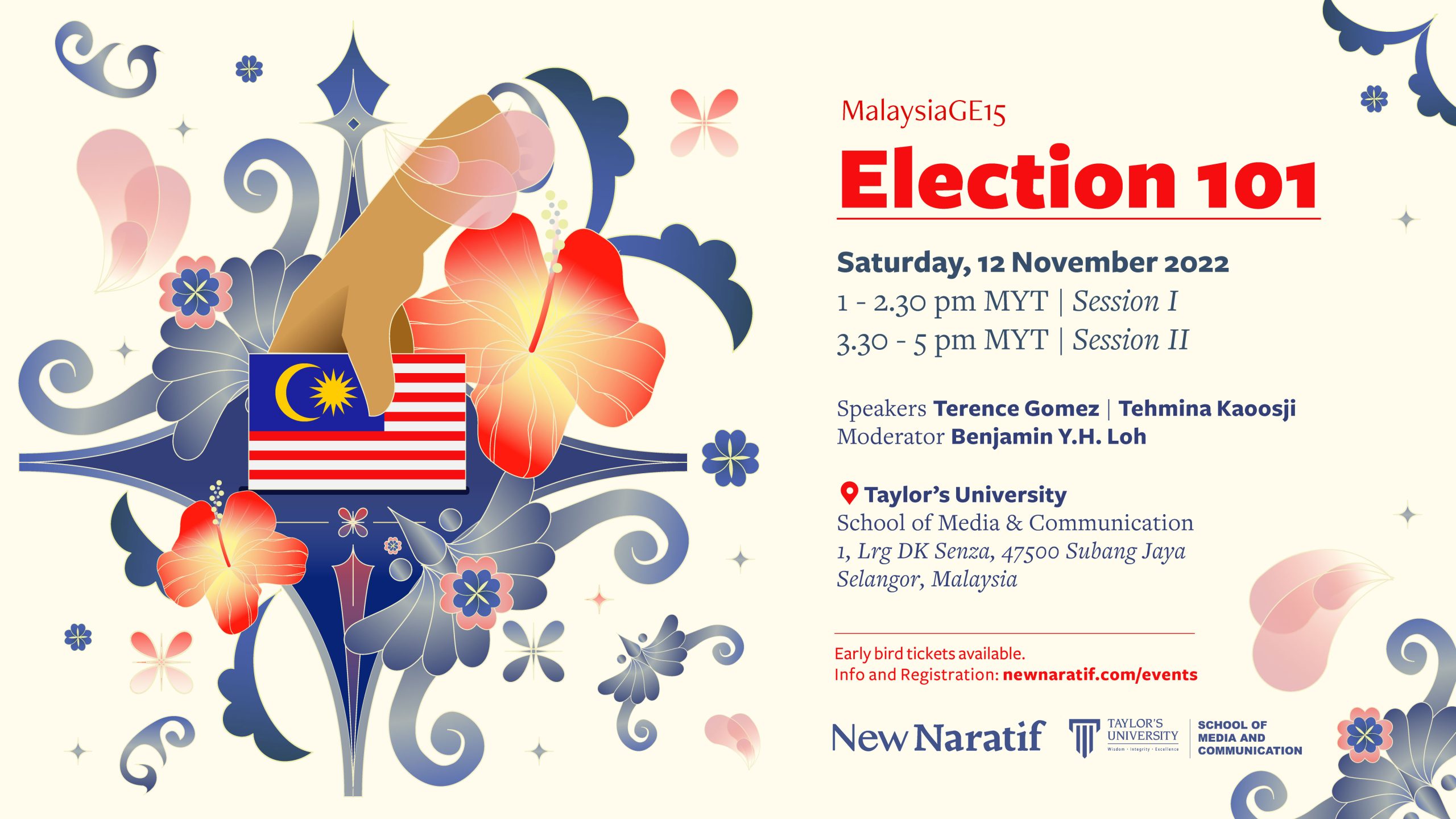 GE15 is just around the corner (in case you missed it, it’s happening Nov 19), and everyone is asking, “How should we vote? Who do I vote for? Why should I vote?” Fret no more, and join us at E5.10 and E5.11 (Block E, 5th Floor, Rooms 10 & 11), Taylor’s University this Saturday, 12 November, for two informative sessions to help unpack your questions leading up to the elections.

To untangle everything, join our first session at 1:00 p.m. MYT with our guest speakers, Prof. Terence Gomez and Tehmina Kaoosji, and our moderator, Benjamin Y.H. Loh, to discuss crucial factors for the upcoming election, from political financing to the role of media and ethical coverage.

Seen all the manifestos and debates on what the people want? Do you perhaps have thoughts or opinions on what’s really important to the citizens of Malaysia? Join Session II of our Election 101 events! We’re co-hosting a democracy classroom starting 3:30p.m. MYT, so come share your thoughts on the top 5 most important issues for the upcoming election as we cover the results of The Citizens’ Agenda Malaysia 2022!

Terence Gomez is the former Professor of Political Economy at the Faculty of Economics & Administration, Universiti Malaya, who specialises in government-business relations. He has held appointments at University of Leeds and Murdoch University and served as Visiting Professor at Kobe University, University of Michigan (Ann Arbor) and University of California (San Diego). Between 2005 and 2008, he served as Research Coordinator at the United Nations Research Institute for Social Development (UNRISD) in Geneva.

Tehmina Kaoosji is a freelance broadcast journalist, having worked with many prominent Malaysian media organisations including Media Prima, BERNAMA, and Sinar Harian. She is also an activist, having spoken and commented on issues such as women’s & childrens’ rights and gender equality in Malaysia. Tehmina is a regular contributor to New Naratif’s publications, having been a contributor to the Southeast Asia Dispatch podcast series speaking about critical issues in Malaysia such as palm oil sustainability, communalism, and the issue of unequal citizenship rights for Malaysian mothers.

Tehmina is a former TedX speaker and is a Thomson Reuters fellow. Her engagements have brought her to the Malaysian Parliament, speaking with the ASEAN Parliamentarians for Human Rights group on hate speech and disinformation.

Benjamin Y.H. Loh (as moderator) is a media scholar who employs digital ethnography to study online communities and the digital public sphere in Malaysia and the region. Having received his PhD in Communications and New Media from the National University of Singapore, he focuses much of his work on the confluence between technology and society, with a particular focus on minority and marginalised communities. He is the co-editor of Sabah from the Ground: The 2020 Elections and the Politics of Survival (SIRD/ISEAS, 2021). He is currently a senior lecturer at the School of Media and Communication at Taylor’s University.

This event is free for all members. Non-members can purchase a US$2 ticket that includes a month of New Naratif membership. Tickets at the door can also be purchased for RM15.

And don’t forget to check out New Naratif’s Election 101 page on Malaysia GE15!