New Naratif is the trading name of and is published by Observatory Southeast Asia Limited, a non-profit UK company limited by guarantee (company number 10747160), whose objectives are:

In its first year of existence, New Naratif has slowly grown a strong reputation throughout Southeast Asia and globally for our stories on the region. Despite numerous political and financial challenges, our membership is growing and we have a steady pipeline of stories which reflect growing impact on the political discourse in Southeast Asia.

In August 2018, Observatory Southeast Asia Sdn Bhd was registered, and in September 2018, New Naratif opened its Kuala Lumpur office, which will serve as our regional headquarters in Southeast Asia. We are in the process of registering the company in Indonesia.

The publishing of New Naratif started on 1 November 2017 and by 30 September 2018, a total of 210 pieces of content have been published:

Of the 190 journalism and research articles, 127 are in English, 44 in Bahasa Indonesia (BI), 8 in Bahasa Malaysia (BM), 6 in Vietnamese, and 5 in Chinese. While we have professional translations for the BI and BM articles, Vietnamese and Chinese translations are done by members of New Naratif whose support has extended beyond financial.

These articles cover a wide variety of subjects from across the region, from the underground music scene in Malaysia to declining press freedom in Myanmar.

*-New Naratif only publishes 50 weeks per year, with the last two weeks off.

We have hired a Membership Engagement Editor to better understand our membership, as well as consultants to help with our Search Engine Optimisation and with our website User Experience and User Interface Design.

New Naratif’s crowdfunding period ended on 2 September 2018. We had 544 crowdfunding members who contributed a total of US$42,710 (see Finances, below).

The crowdfunded donations were used to build a new website and backend, necessitating that subscribers re-enrolled themselves onto the database. They were given coupon codes to enable them to purchase new memberships for free, at the same level at which they supported us at in the crowdfunding campaign.

Our members are domiciled in 21 countries. Of our 544 members, the majority (427) are registered as being domiciled in Singapore. The next most common countries are the United States of America (44) and the United Kingdom (24). We do not collect any information on our members beyond name, email, and their tax jurisdiction (please see our privacy policy), so we are unable to provide any further breakdown of membership.

In October 2018, we hired a Membership Engagement Editor, Deborah Germaine Augustin, who is based in Kuala Lumpur, and who will be in charge of our relationship with members, organising events, and increasing engagement. We will be holding regular Open Meetings in Kuala Lumpur, as well as other events.

New Naratif is proud to be an organisation which prizes diversity. Our staff are majority female, and come from a wide range of ethnic, religious, and linguistic backgrounds. They are all Southeast Asian (or permanently resident in Southeast Asia), intimately connected with their local communities, and passionate about telling important, meaningful, and relevant stories about our home region.

We are supported by a network of 80 contributors across Southeast Asia. Our relationship with our contributors goes beyond just the publication of content. Our contributors are a valuable source of information, advice, and also function as eyes and ears on the ground to help us identify important issues which we can address.

Apart from our Editor-in-Chief, New Naratif does not pay any salary to our Directors (Managing/Research, Design, or Creative), who work on a pro bono basis. Our Editor-in-Chief began drawing a part-time salary in March 2018, following the receipt of a grant (see Finances, below).

New Naratif currently employs four editors, all on a part-time consulting basis. Our Editor-in-Chief, Kirsten Han, covers Singapore. We also have Consulting Editors for West Malaysia (Pauline Wong), North Sumatra (Aisyah Llewellyn), and Jakarta/Papua (Febriana Firdaus). Febriana will be departing in November 2018, but we are finalising a new hire for Jakarta, along with new hires for Sabah and Cambodia. We continue to seek Consulting Editors for other major urban areas and majority-minority areas of Southeast Asia, in particular in Borneo/Kalimantan, Eastern Indonesia, and Philippines.

Aisyah Llewellyn doubles as our Regional Editor. Her remit will be to find stories which encompass more than one Southeast Asian region, and to draw upon our contributor network to find local voices who can those stories.

New Naratif is also committed to publishing in multiple Southeast Asian languages. Due to technological and funding limitations, we are currently publishing chiefly in English, Bahasa Indonesia, and Bahasa Malaysia. We run a newsroom that works on articles in multiple languages simultaneously, with the Editor-in-Chief leading the English language output, and two Deputy Editors in Bahasa Indonesia (Aisyah Llewellyn) and Bahasa Malaysia (Pauline Wong) taking charge of content in those languages respectively. We are finalising the hire of a sub-editor in Bahasa Indonesia.

New Naratif is looking to expand the team, especially a Design Editor and assistance for research activities.

New Naratif is a non-profit organisation. We have adhered to the principle of sustainable funding, spending only what we have on hand. This principle allows us to tread water – we lost money in seven months of the year, but made money in five months, allowing us to finish the year with balanced books. It helped that our Editor-in-Chief worked unpaid until March 2018. This, however, is unsustainable due to increased staffing and publishing costs going forward. We will need to expand our membership base, and find new grants,and donations.

New Naratif’s 544 crowdfunding supporters contributed a total of US$44,238(Approximately US$42,710.00 after transaction fees and loss from currency exchange).

Thanks to the grant from Foundations Open Society Institute (FOSI), we were able to expand our team, complete the development of our website, and more than double our output of the number of articles on offer. 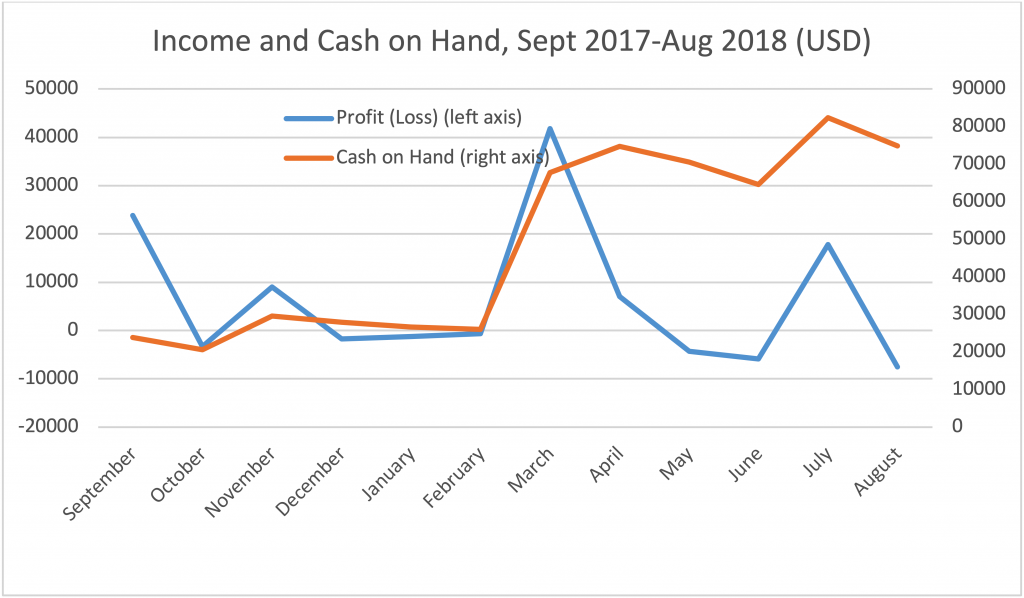 In response to the rejection, we accelerated our timetable to open our Kuala Lumpur office, successfully launching it in October 2018. Our goal of opening an office in every Southeast Asian country remains, although it may be a long time before we can open an office in Singapore.

One of New Naratif’s authors, Will Nguyen, was arrested and beaten by Vietnamese police while attending a public protest in Ho Chi Minh City. A Vietnamese-American, he was, fortunately, released after a short spell in jail and pleading guilty to charges of disturbing the peace. While this incident had a happy ending, it is a reminder that our contributors face threats to their safety across Southeast Asia, and we will continue to do what we can to help our contributors remain safe while they do their jobs.

Long term financial sustainability remains a challenge. However, we continue to grow every month and we aim to increase our membership by another 500 members over the next year. In the meantime, we will continue to apply for grants from various funding bodies.

Over the next 12 months , New Naratif has three main aims: